USF2000: Alliance Autosport has Strong Run with Rettich and Verra at St. Pete 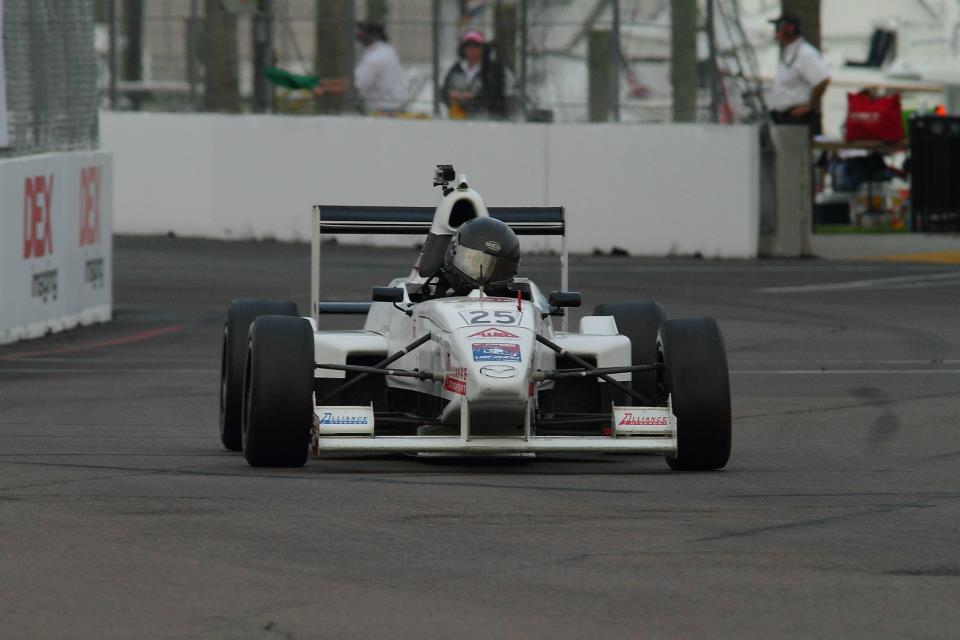 Scott Rettich, 28, of Camden, Ohio, started the weekend off strong by qualifying the No. 71 PDI Communication Systems/Springboro Car Wash entry on the pole for Round Three at the St. Pete Grand Prix. Rettich relinquished the lead to his teammate Ryan Verra on the start, but after a few laps under caution, Rettich was able to move back into the lead and open up a sizeable gap over his next closest competitors in the National Class Presented by SCCA Enterprises. In the process, Rettich was able to run a fast lap just 1.6 seconds slower than the fastest competitor in the faster Championship Class. In Round Four, Rettich was again able to stay out of trouble and take a comfortable win over second place finisher James Dayson.

Verra, of Calgary, Alb., also had a strong start to the weekend, running second fastest in the majority of each official practice sessions in the National Class. Verra started the No. 25 Capto Scientia/Enemy Sport/Toshi/Cancer Research Society entry from the third position in Round Three, and had a stellar start avoiding all of the carnage in turn one, moving into the lead. After a few laps under caution, Verra, surrendered the lead to his teammate shortly after the restart. Unfortunately, on the final lap of the 21 lap race, with second place well in hand, a competitor in the Championship Class bumped Verra into the wall and out of the race.

“All in all it was a really good weekend for us,” stated Alliance Autosport Team Manager Suren Tchobanian. “Scott was again extremely quick each session, and Ryan made big improvements in both speed and consistency since Sebring. It was very unfortunate that Ryan was knocked out of the race, because I think he would have finished at least second in both races. We are really excited for the next USF2000 Series event, the official test at our home track, Mid-Ohio!”

Alliance Autosport is a professional race team based in Columbus, Ohio. With multiple championships, including two SCCA National Championships and three SCCA Pro Racing Championships, the team has found success at both the club level and the professional level. Alliance Autosport is the SCCA Enterprises Great Lakes Division Customer Service Representative for Spec Racer Ford and Formula Enterprises. The team competes in SCCA Club Racing Regional and National Races, along with the USF2000 series. The team’s services include arrive and drive in Spec Racer Ford, Formula Enterprises, and USF2000, preparation and track side support, transportation, storage, part sales, and driver coaching and development. Alliance Autosport’s team members are dedicated, hardworking, and know what it takes to win. More information about the team is available at http://www.allianceautosport.com and http://www.facebook.com/Alliance-Autosport . Drivers interested in testing or racing with Alliance Autosport are asked to contact Scott Rettich directly at scottrettich@allianceautosport.com